Interacting With Home Buyers: 3 Rules To Sell Your Home For More 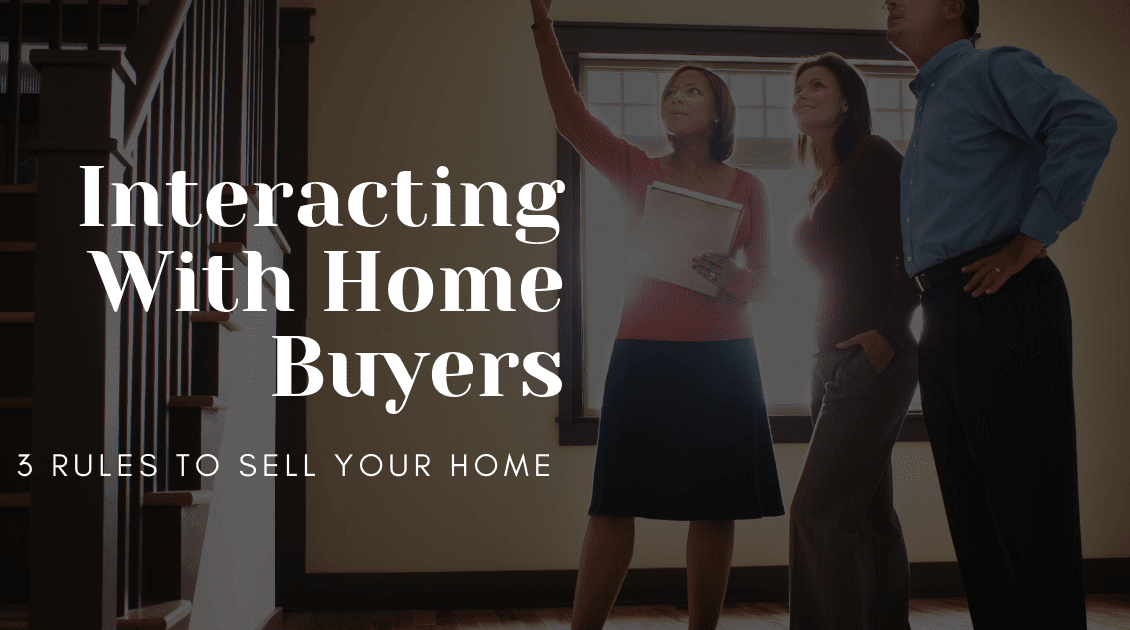 If only selling a house was as easy as this: buyer likes house, buyer buys house, you move out. End.

Unfortunately, it’s not quite as simple as that, but there are ways to make the entire process a whole lot easier. It’s called interacting with your potential buyers and involves manners, mindset and measure.

Why you need the 3 Ms to interact with buyers

I’m sure that when you were growing up, you were told to ‘mind your manners’. It’s these little pleasantries in life that can go a long way when it comes to getting on with people and, in the case of selling a home, making a person part with a HUGE amount of money.

First impressions count (and that works both ways).

It is to your benefit to make a potential buyer feel at home, and there’s no better way to do that than by welcoming them into their ‘new’ home.

If you are holding an Open Home, it’s imperative that you have a person at the door to greet and invite people inside. There’s no need for a marching band or letting off party poppers, a warm and friendly ‘hello’ and handing them the property details will suffice. If you feel that you’re going to be too busy to do this, ask a friend, a neighbour or colleague to do it for you.

Once the buyers are through the door, make sure to introduce yourself to all members of the party. And, be warned, from my experience, despite lurking at the back of the group and appearing as if they’re a passive viewer, that background figure is usually very important to proceedings, so make sure you say hello to him/her. I call him an Uncle Barry. Who is Uncle Barry? He’s an expert, that’s what. Uncle Barry (delete and amend name as appropriate) is one talented man/woman. They are a ‘fault finder’ extraordinaire based on their time in the military or, when they spent six months selling one house back in 1969; they’ve just bought a new home themselves, they’re handy with a screwdriver, they are an astronaut freshly home from a stint on the International Space Station – you name it. Uncle Barry has seen it all, and when in doubt, his opinion counts.

It’s therefore crucial that you acknowledge everyone in the group at all times. If there’s a question, answer it by speaking to all involved. An issue? Again, talk to the whole group, I’d even go so far as to say that when you’ve pinpointed an ‘Uncle Barry’ in the group refer to him/her. Get them in on the conversation and onside.

For example, if there’s a bit of rotten decking, bring Uncle Barry in on the conversation. ‘Yes, the decking is a bit rotten in places, but it’s an easy fix, don’t you agree Barry?’

It might seem like you have to go to extremes to please everyone here, but it’s essential, and it will pay in the long term. Believe me.

A prizefighter would never enter the ring without a plan and you shouldn’t either. If you want to sell your house, you need to be organised and carefully think through your plan of action. And that involves mindset.

When it comes to selling your home, it can be all too easy to focus on the house and not the buyer. Yes, you want it to appear at its best, you’ve even had a word with ‘him upstairs’ and asked for the sun to shine on your Open Home. But let’s not forget, that as glorious as your home might look, you still need to sell the home to the buyer.

All too often, I’m told how a seller has the ‘gift of the gab’. On hearing this alarm bells tend to go off inside my head because the ‘gab’ is not always a gift. I imagine the seller dropping puns and ‘Dad/Mum jokes’ while the buyer shrinks into the corner of the room. Don’t get me wrong, I admire folk who want to sell their own home, and I have every faith that they can do it (that, after all, is one of the reasons why Agent In A Box exists), but you need to approach interaction with buyers with grace and nowse.

When it comes to showing people around your home, you need to give them space. While they might want to ask you questions about the exterior wall or when you laid the wood flooring, you do not have to follow them around as if you’re attached to them by Velcro.

Likewise, give them mental space too. I suggest you don’t spend an hour telling would-be-buyers all about your beautiful home and the fantastic times you’ve had in it, including the one time when your Auntie Joan visited from Sydney…. and spent three weeks sleeping on the spare room…. and one night got up and went sleepwalking …and accidentally walked into the wrong room… SNORE.

You don’t want to make your buyers feel like they’re a rabbit trapped in the headlights. Instead, let them walk around and create their narrative about the house – let them imagine themselves living there and inviting their Auntie Joan to come and stay.

Finally, when it comes to mindset, you need to play the long game. You’ve met the potential buyers, they seem to like the place, but it doesn’t end there. You need to follow up. Time and time again, I’m surprised to learn that sellers don’t chase up viewers. If someone looks interested, give them a call. If they didn’t seem interested, still give them a call. And note the word ‘call’.

I believe we rely too much on emails and text messaging and that real interaction gets pushed to the wayside. It pays to pick up the phone and ring a viewer. Ask them if they liked the house and would they like to come back and take another look. Pick their minds, for instance, they might like the house but are wondering about local schools or whether there are good traffic links closeby. You know the answers to these questions and can save them time spent searching. Be helpful, be productive – and for the love of all things cute and furry, have an ‘I want to sell’ mindset!

Now, let’s be clear. I’m not talking about a tape measure (although they’re very handy). I’m talking about being measured, which means not letting emotions get in the way of your ideal conclusion – which is, in this case, selling your home for a great price.

If a buyer comes to your home, it’s fair to expect buyers to ask questions and, like it or not, some of these might push your buttons. Typical questions you can expect are:

How you answer these can make a big difference; it’s the wording that can sway an outcome, not necessarily the answers themselves.

Here is how I suggest you answer them.

Remember my 3 Ms – manners, mindset and measure – for great interaction with potential buyers.